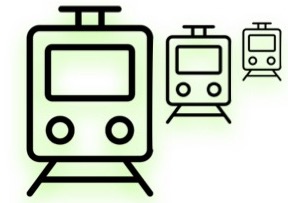 Here I sit, in my high speed low carb train, minding my own business. It’s 2052 and it’s one fine world rushing past outside. Would love to savour the view, rows and rows of splendid windmills, but annoyance. People are so gross these days. Instead of politely lowering their voices, they talk as if this was there living room

There’s this guy, two seats ahead, pretty massive, and the voice to go with stones of body. No risk not to hear what he’s telling this other guy, same age, leaner format. Perhaps some kind of colleague, perhaps from an earlier career phase. The two of them boarded at the last stop. Massive didn’t wait to reach their booked seats, was already talking when they entered the carriage:

… and oh yes indeed, it does work. Like hell it does! And this presentation will change the world. Once and for all, and for the best. Trust me, this time next year, we’ll be flying private.

Massive is all excited, Lean has every chance to get spitted at, in the heat of the action. Wonder if he would like to comment, can’t see his face from where I sit. Massive doesn’t give him much of a chance, he’s gushing on and on:

You know how they always say ‘Don’t pretend your invention beats sliced bread’? Well, this one does. With the empathopotion, all will be well, finally. Here, look at this, and that’s just a little selection of testimonials. And don’t you think I picked the most enthusiastic endorsements. Au contraire, totally au contraire. I had to hunt for as low key as possible, because otherwise, who will believe me.

Here, this guy, for example. Won’t turn up to sound, otherwise we’ll get complaints, but just look at this face. Tells you all, doesn’t it? He joined the trial with his partner, as a last resort. They were forever fighting, about pretty much every detail of day-to-day life anyone can imagine, as close to separation as you can get before finally proceeding. Two weeks on the empathopotion, and here they are, hardly remembering what it was they used to fight over. That’s what an increase in empathy achieves. Incredible, isn’t it?

Massive is one annoying person, but I confess I’m starting to take an interest. This empathopotion might be in urgent need of a more catchy name, marketroids will have to come up with something else, but if it does what I’m starting to understand it is supposed to do, wow. No reason to disturb thirty innocent people, not the big bang wow, but a bit of wow anyway. Must be too good to be true.

Massive isn’t done, provides examples number two and three. A single mother struggling with her teenage daughter, both on the potion, two weeks, fighting greatly reduced and much more civilised. An elderly couple clashing over whether or not to give up the house and move into a retirement home, both on the potion, two weeks, unanimous decision to start with a third way and hire live-in help.

Massive doesn’t sound like running out of examples any time soon, but lean surprisingly manages to cut in, and quite an agreeable voice he has:

Yes, sure, point taken, and by the way: I’m familiar with this presentation. You sent it, not to lose time on the train, remember? Or do you need to take your potion, these days, to notice I’m trying to comment? Only joking, of course, don’t get me wrong. But I do wonder what happens if this is administered without consent?

I so love Lean. This thought has been all over my mind ever since I allowed the hypothesis of an effective empathopotion to form.

Unfortunately, Massive chooses this most inappropriate moment to discover his inner polite person and lower his voice. Mental note to check the usual portals for news of an empathopotion. And a little additional care around fluid intake might be a good idea.

Manage Cookie Consent
To provide the best experiences, we use technologies like cookies to store and/or access device information. Consenting to these technologies will allow us to process data such as browsing behavior or unique IDs on this site. Not consenting or withdrawing consent, may adversely affect certain features and functions.
Manage options Manage services Manage vendors Read more about these purposes
View preferences
{title} {title} {title}